This is part 2 of our interview with Robert Steve Silverstein of mwe3.com.  We got into some really interesting areas about the way we constructed the beats on our last album, Drum Cargo: Rhythms of Earth, the cultural influences and plans for our next music project. 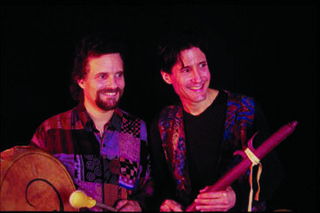 mwe3: How many different styles of drumming do you feature on the various Drum Cargo albums? Also, are certain instruments needed or required for certain drumming styles?

Our intention with the Drum Cargo series was to represent many cultures and styles, to find the connections.. You’ll hear everything from African, Afro-Cuban, Native American, Celtic, Middle Eastern and Brazillian.

In our combined collection of drums we have everything we needed for all of these styles.  We have a great selection of drums from all the cultures needed.  It really would not have been possible to create this series of recordings without having this selection of drums.  The drums were all authentic and it was a wonderful experience to be surrounded by all of these instruments during the recording sessions.  It really gave us a sense of energies within each of the cultures that seemed both different and similar at the same time.

mwe3: What was the writing / recording process like for the Drum Cargo Rhythms Of Earth album? Was there a lot of preproduction and also a lot of improvisation to match the compositional idea

For each song we started with a rhythm from one of the cultures and played them on the drums from that heritage.  Then we combined those rhythms with others from other cultures that would sync well with the core beat for each track.  At the same time, we thought of which element we were evoking and selected instruments that would have that result. 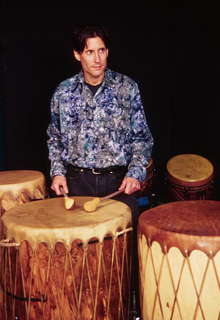 Once we have those beats and instruments chosen for each track, we played them together allowing the magic of the moment to guide the interplay of our parts.  There is something particularly magical that happens when you improvise using only rhythm instruments.  You interlock parts with the other musicians in a way that goes beyond what happens when there are also melodic instruments. Also most of us had played together many times so there was really good chemistry between us which we were able to draw upon.

mwe3: What cultures did you discover are best known for using tribal drumming in their cultural or religious activities and was drumming probably the first music made? Even back to the cave man days. Did it go from the drum to the flute and from there to the infinite?

All of the cultures included on these albums have rich histories of using tribal drumming in their societies.  We found it wherever we looked!  Music and dance is universal - at the core of all cultures from the very beginning.  Drums were not the first music though, first came singing, then flutes and drums.  The power of the drum for entrainment became essential to the shamanistic and meditative aspects of the culture’s spiritual life.

With these recordings, we wanted to dig deep into the rhythmic heritage of the Western side of the globe, ranging from African and the Middle East to the Carribbean, and the Americas – North & South.   We didn’t include many beats from the Far East because the underlying meter systems are so different. We’re intrigued by the long cycles of Indian Raga,  the interlocking beats of Indonesian Gamelan, and so much more.  We’d like to explore those directions in future albums.

mwe3: What is the oldest drum (or other instrument) you’ve every played and what’s the newest? It must be big market to make drums and other percussion gear including all types of drums and drumming gear. 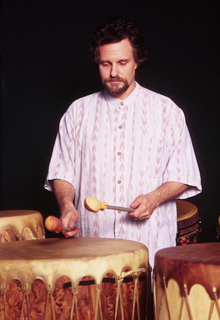 The oldest ones we had available to play in our studio for these albums were the African slit drums.  African slit drums are among the very first drums ever made.  They consist of a round log with some slits hollowed out in the side that give the log some resonance and it’s pitch -- fairly high pitched for a drum. They have a sort of clicking wooden sound that you can hear on these albums.  They are played with thin carved wooden sticks.

different amounts of water in them to create different pitches.

We also used unsual sounds from objects found around the house  to create the different elements such as metal pots and pot lids!

mwe3: With all the computerized file sounds on drums I think it’s great you’re going back to recording vintage and even ancient drums. Do you think drumming was more popular in the age before computers took over? A lot of the greatest drummers recorded in the 1960s. What drummers from any musical genre influenced your playing? Were the best American jazz drummers black? I’m thinking about Art Blakey, Elvin Jones and Jack DeJohnette to name a few African American giants.

Acoustic kit drums like in rock bands aren’t as central to pop music as they were back then.  I remember going to concerts and the drummer would always take a long solo.  The beat is still there now, but it’s morphed into sounds made by all sorts of devices and methods. 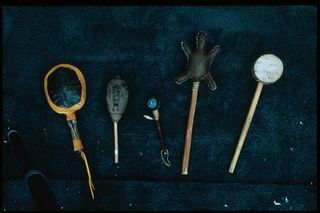 The essence of drumming is still just as popular or more so though. Pop music songs are built upon the same legacy beats.  Now they’re often composed on computers using software like Ableton Live or Logic Pro,  but the rhythms are  still mostly from hip hop, rock, blues and jazz, that evolved from African, Afro-Cuban or even Carribean rhythms.

mwe3: What kind of album or albums are you considering making next with the drums as the focus? Are there other directions you and Sequoia Records could go in while keeping the focus on the drums?

We have a unique idea for a new kind of music that features world drumming at the core, with new sounds unlike anything we have heard before.

But we’d rather share the sound than explain it in words.  We’re considering sending downloads of rough mixes of in-progress tracks to our fans through our email list in mid 2015. We’ve never done that before and we’re looking forward to sharing these with our fans.

When we plan new releases we always search for a new concept we have not encountered before.  This is more interesting to us and we hope to our listeners as well!   We feel more satisfaction making our contributions to the stream of musical creativity that is flowing.

Karmacosmic is an ambient music supergroup featuring three of Europe's most popular electronic music artists; Rüdiger Gleisberg, Matthias Grassow and Carsten Agthe. We became aware of them a few years ago from our European record label associates when we featured some of their tracks on a couple of the Sequoia Records electronic music compilations we created: Yoga Salon, Chakra Healing Zone, and Yoga Salon.

It’s been a pleasure working with them on this release and we are really pleased at how the album has been received.  People who were not aware of them instantly loved it and their fans are thrilled.  Music for Tantra and Meditation entered our distributor’s top 10 album charts within the first month of it’s release.

The album is instantly popular amoung people into yoga because it creates a very serene yet exotically textured mood that works so well both for yoga and for the yoga lifestyle.  It’s the kind of music you can either put on headphones and disappear into or just play it in the background at a mellow party.