We recently sat down with Robert Steven Silverstein of mwe3.com to discuss our latest release, Drum Cargo: Rhythms of Earth and the new Karmacosmic album, Music for Tantra and Meditation.

We share some fascinating details about the making of the Drum Cargo series and lot of other behind the scenes facts. 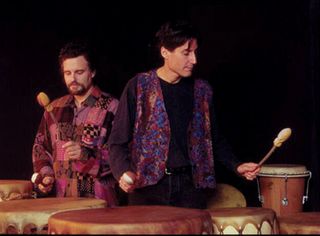 mwe3: How many Drum Cargo titles have been recorded and released on Sequoia Records and can you tell the readers something about the basic concepts of the series and how would you say the recently released Drum Cargo: Rhythms of Earth title is unique from the other Drum Cargo abums? Is there a musical thread running through the series.

So far we have released 4 albums in the series, one for each of the four elements:

The idea behind this series was to explore creating music using only drums, percussion and a small amount of Native American flute.  We wanted to give ourselves this creative limitation and see if we could create music that was as engaging, interesting and satisfying as music that had more melodic instruments.

What we discovered was that it is not only possible, but not that hard considering the richness found in the sound of ethnic drums and how much more you can hear that richness once you remove all the melodic intstruments. 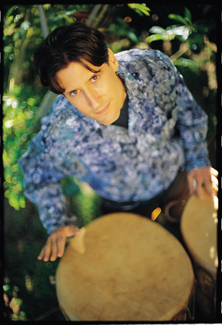 For each of the 4 albums, we created beats and songs that expressed the qualities for that element.  So for the new one, Drum Cargo: Rhythms of Earth, we used lots of large deep sounding drums and created beats that were earthy and empowering.

mwe3: How many different types of drums are in play on the Drum Cargo series and who were the other musicians and artists involved in the production of the Drum Cargo: Rhythms of Earth album? Do you always seek out some exotic new drums or sounds to use on a new Drum Cargo recording and for those who aren’t familiar with it, can you explain the concepts of Shamanic drumming? Is Shamanic drumming a form of primal therapy using drums?

There were over 50 different types of drums played on the Drum Cargo series.  But that does not include the different varieties of each type of drum.  For example we used Djembes, but there were many different types and sizes of Djembes played.  The same applies to many of the other drum types that were used.  So even though the number of types of drums was around 50 there were 3 or 4 times that many in our studio while we were recording!

Here is the list of instruments used on the Drum Cargo series:

The other people who played on this series were Kim Atkinson and Bobby Cochran.  Kim is an authority on Afro-Cuban drumming, very knowledgeable, and has a large collection of drums and percusssion.When he brought just a small part of his collection to my studio (David and I each have our own studios) and we laid out all of his drums next to our also extensive collection plus Bobby’s drums, it was quite a scene. There were drums and percussion from around the world of all shapes and sizes spread out across the entire studio.  It was hard to even walk from one end of my studio to the other, and my studio is over 750 square feet!

Since we had decided that each Drum Cargo album would be for a different one of the four elements, we made lists of which drums would be used on each album based on if the drum either sounded like a particular element or  sometimes we even used one of the elements such as when we used a bowl of water as a drum for Drum Cargo: Rhythms of Water.  Kim also had an ocean drum which had sand inside it.

We’ve been into Shamanic Drumming since the 90’s.   Through all-night drum circles in the mountains we experienced first hand the power that drumming can have as an entry into the trance state of consciousness.  It is in this state that it is possible to heal your spirit, your mind and even your body since the body is effected by the quality of your thoughts.

This is the Shamanic state. Ancient people used drumming as a portal for the Shaman to enter into what they called the spirit world, or the lower world, in search of healing and vision for themselves and their people.  We explored these themes deeply in our albums such as Sacred Spirit Drums, Shaman’s Vision Journey and others.  Now we are using the pure accompianed sound of the drums themselves to access the Shamanic world with the Drum Cargo series.

mwe3: When did it inspire you to first start creating an album of only drumming? I hear a lot of African kind of rhythms in the Drum Cargo: Rhythms of Earth tracks. I also hear some of Ginger Baker’s drumming style. Are some core concepts of drumming related to African rhythms and tribal rituals? 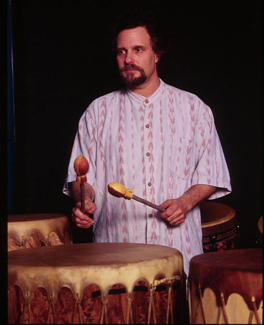 The inspiration for this goes back to when we recorded our earlier world fusion albums,  Sacred Earth Drums, Drum Medicine and others.  Those albums grew our of our experiences with the drum cirlces in the forest. They were sort of cinematic, a journey through layers of sound --  Native flutes, acoustic and electronic instruments, guitars, piano and some vocals and chanting.

The drums were always the foundation and heartbeat.  When we mixed the drum tracks for those albums, we were amazed to find that even with the focus so completely on the drums, we could still hear and feel the essence of the melody and musical composition coming through the beats themselves. So way back then, we started planning some albums that bring forth the essences of the drums, in a way we hoped would allowe people to really connect with them directly.

When we were at those all night drum circles in the mountains and experienced how expressive world drums and percussion can be and how the musical conversations you can have with them are every bit as engaging as melodic instruments.

The way that different beats interlock together can create different states of conscisousness.  Tribal cultures from around the world have used drums and rhythms like this to journey into other realities as a source of healing and strength for their people.

When you play these rhythms you feel connected not only to each other but to your ancestors and to the universe.  The mind becomes entrained by the beats and it becomes a form of meditation.  You can experience this by playing in the drum circle or by just listening, if you focus on it.

Stay tuned for Part 2 of our interview soon...