We would like to share a recent interview we did with Ambient Visions, a fantastic site devoted to the very best in ambient music.  With over 2 million people in their audience, they have become one of the most trusted voices for music.

We were interviewed by their intrepid editor, Michael Foster.

Michael: Music seems to supply the soundtrack to many of our lives from a very young age to the day we die. Tell me about the role that music played in influencing and shaping you during your younger years.

Steve: There was a lot of music in our house when we were young. Our parents enjoyed the 60’s and 70’s folk music revival and were also into ambient music. The two of us started performing at our family gatherings as early as 4 or 5 years old. Michael: When was it obvious to you that music would play a larger role in your life than just listening?

Dave: By the time we were in high school we starting jamming together and playing in bands. Around this time we started to think about doing it professionally too. We soundproofed our garage and had musicians over to play with us.

Michael: Did you ever have any formal training in music? How does your classical training shape/influence the music that you compose?

Steve: We both studied music in college and attended the Dick Grove Music Academy in North Hollywood.

Michael: What is your instrument of choice for creating and making your music and why were you drawn to that instrument?

Steve: Even though we both have become proficient on many instruments, I still enjoy playing the guitar the most, both acoustic and electric and David prefers acoustic piano.

Michael: When did you start composing your own music and how would you characterize those early compositions in terms of style?

David: We started writing music in our teen years. Our first songs were rock music - a combination of psychedelic rock and progressive rock. We didn’t record anything that long ago but we do have some recordings we made in our early 20s on an old 4-track tape machine. They don’t sound too bad either! 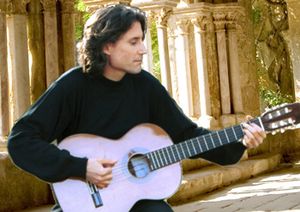 Michael: Tell me about the Sequoia National Forest and how much of an inspiration it became to the music that you composed?

Steve: We discovered Sequoia National Park was a pretty accessible place to go from Los Angeles to decompress from living in the city and doing lots of session work. We had been into meditation for a while and especially liked to meditate sitting by the river in the mountains on back-packing trips. It was during one of those trips when we got the idea to compose ambient music to interact with recordings of the nature sounds in the forest. We’d been listening to the first couple Brian Eno albums around that time and that influence helped us to sort of find and bring out the musical environment from within sounds of nature.

Michael: When did you decide to form your own record label rather than trying to get your music onto an existing label? Did you have any experience with the business end of the music industry before diving in with Sequoia Records?

David: It was a natural decision for us to sell our early ambient music albums on our own label since it wasn’t anything like the music on the radio. We didn’t have any music business experience other than studio session work, so we just made the albums and started selling them.

Michael: Your compositions also incorporate nature sounds that you recorded into your music beginning with your very first release Misty Forest Morning in 1982. What were you hoping to achieve by this blending of your music and the sounds of nature?

Steve: Our intention was to transport stressed out people to a peaceful place in nature using music, for people who didn’t have access or time to visit the wilderness. We believed then, and still do, that being in nature can quiet the mind and create the inner stillness so important for reducing stress and being well.

Michael: Was it difficult to get good quality field recordings to incorporate into your music in 1982? How did you go about capturing those sounds?

David: It was a challenge, especially on our small start-up budget! We needed the recording equipment to be battery powered and small enough to fit in a backpack -- back then the only option for that was cassette tape. We used a Nakamichi professional-grade cassette recorder that had VU meters and separate record level controls for each channel. Wind was the biggest obstacle because it overloaded the inputs. We used a couple vocal mics from our studio and improvised wind screens of fabric and foam. We learned to record at times of day when the wind was at a minimum and by finding sheltered spots to place the mics. Once we got everything set up, we put on the headphones, pressed the record button, and meditated while the tape ran.

Michael: At the time of your first release (Misty Forest Morning) did the genre of new age even exist? Who was your music aimed at back then and in 1982 how did you go about reaching those listeners and letting them know about your music?

Steve: When we made our first few ambient music albums, we were not aware of any other new age artists, we only knew about Brian Eno’s early albums like Music for Airports and Day of Radiance with Laraaji. Once we had made our first album, we starting contacting local metaphysical book and gift stores to see if they wanted to carry it. That’s when we found out there were a few other artists who already had some albums in those stores. I’m not sure, but I think one was ”Zen Waterfall” by Paul Lloyd Warner. At the time, most of the store owners would keep the albums near the cash register, they didn’t even have a real music section. Initially it was through these kinds of stores that people discovered our music. This was before the internet so we included a mail order form in our albums for people to contact us to send them a catalog. We also approached book distributors and convinced some of them to offer our music to their retailers as well.

Michael: What is your philosophy about what your music can accomplish in a person’s life beyond just entertaining and distracting them for the stress of 21st century life?

David: Of all the arts, music is the most subtle and the most powerful in its power to transform. Music is literally made of vibrations - when people are exposed to those sound waves, their entire body/mind can be affected on a deep level.

Of course, music is great for entertainment, and we enjoy listening to lots of different kinds of music. But we believe that music created with deep intention can bring people wellness and inner peace and balance, and help them cultivate mindfulness.

Our music is used in this way by many health practitioners, body workers, spas and healing centers. But we don’t focus on those practical thoughts when we create the music. Instead we do our best to create music from a centered place that we access through meditation and through being in nature. We feel that when music arises from that peaceful state of being, those transformational qualities are naturally expressed in and through the music.

Michael: How do the two of you mesh your individuality into a cohesive whole when it comes to composing music that will be on each of your albums?

Steve: Since we are brothers we have been fortunate that our musical chemistry has always been something that we don’t have to think much about. We do have our own tastes and different approaches, but when we work on something together, once we decide on the overall direction for the album, our contributions complement each other’s really well.

Michael: Do you think listeners fully appreciate the potential of music to bring about changes in their lives?

David: There are some people that do. I know there are many who follow our releases and our record label Sequoia Records who look at it that way. But of course that’s is not a mainstream view. We hope that every record we release will reach people who need and are ready for that transformation in their lives, one that brings peace of mind and overall well-being.

Stay tuned for part 2 in our next blog post...