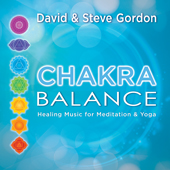 After many months of recording, we are thrilled to share our new album
Chakra Balance: Healing Music for Meditation & Yoga with you!

Our interest in Eastern philosophy began when we were in high school.  We came across a book called The Handbook to Higher Consciousness by Ken Keys. Then we discovered Be Here Now by Ram Das and become interested in meditation, that grew into a lifelong practice.

Over the years we read the Eastern philosophy classics and learned about the chakras that had also become integrated with our meditation.  We continue to meditate on our energy centers and focus on them during yoga classes.

To create the music on this album, we did some meditation in the recording studio to get in touch with the energies of each chakra and what kind of sound they suggest.  During recording we would often stop and meditate on what we had so far to make sure it was still resonating in the right places.

We hope that this music can deepen your awareness and balance your energies as it has ours.

The album has two sets of songs for each of the 7 chakras, so you can use it for either a short or long meditation or yoga session or for just relaxing.   The sound is soothing ambient electronic music with a little native flute, fretless bass and sounds of sitar.  You can hear samples and read more about it
on our website.  Let us know what you think!