It was great to read this review of our 25th Anniversary DVD/CD release, Earth Drum Visions.  If you have not checked out these videos yet, you can see one of them if you scroll down to the bottom of this page. - Steve

Here is the review: 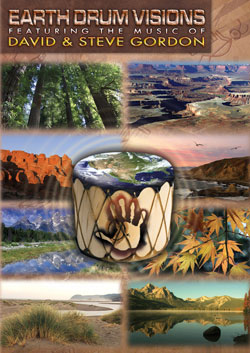 "We hope that our music connects people everywhere with the Earth and inspires them to help heal and care for her." - David and Steve Gordon

"Thirty years ago on this day, in 1982, Sequoia Records was born.

In celebration of the 25th anniversary of their award-winning career,

Steve and David released Earth Drum Visions, a collection of eight of their favorite songs paired up with nature films featuring America's most pristine natural environments. The natural footage, which was originally shot in state-of-the-art High-Definition by award-winning filmmakers, is beautifully synchronized with the music. The Earth Drum Visions DVD and CD collection is part of Sequoia’s new "Music and Vision" series.

The Gordon brothers' cinematic surround-sound audio score is combined with scenery shot by filmmakers Michael Heumann, Quinn Schumaker and Leslie King, each element bringing the other to life. This merging creates a multi-sensory experience and ambiance that is unmatched.

The Gordon brothers have looked back over their innovative twenty-five year career and selected eight tracks for this collection. Earth Drum Visions is rich in Tribal drums, sounds of nature, Native American flute, keyboards, Andean panpipes, guitars and percussion from all over the world. The compositions move from relaxing, quieter pieces to more emotionally stirring, heat inducing tempos and rhythms. The spiritual roots of the sounds are evident, making the DVD a great tool for meditation and yoga.

Two Cats On The Cool Train

David and Steve have been putting out award winning albums since I was a small tot. The Gordon Brothers are an unstoppable force in new age music, with nature backing them up ... literally.

They are committed to creating music that connects people to the earth and to the deepest parts of themselves. Sequoia Records has more healing music planned for the future.

One of the great aspects of this label is that, with its peace of mind guarantee, you can enjoy Sequoia music risk-free . Sequoia allows you to return any purchase for a full refund or exchange and best of all, their guarantee has no time limit. It lasts forever.

I highly recommend the Earth Drum Visions DVD and CD collection. You will not be disappointed. For more information please visit Sequoia Records."

- Review by Angel St John on An Angel's Kiss blog

We got at real kick when we read this new review from Daily OM.  They really got where we were coming from back in the 80's when it was first released.  It's a very entertaining read, check it out. - Steve 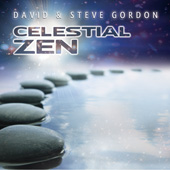 "David and Steve Gordon have recorded a vast array of world, trance, loop, and meditation-based music since they formed their Sequoia label, but Celestial Zen goes way back in time to the early ’80s, when they recorded the tracks as part of their Visionary Environments series. The analog synthesizers squiggle and shake with resonance thanks to digital remastering, but the old-school space cadet glow is all there. The retro-futurist aspect gives the album an ’80s sci-fi soundtrack vibe, reminiscent of then-futuristic acts like Tangerine Dream and Klaus Schulze. It’s music meant for big, fuzzy headphones and deep third-eye visualizations of Andromeda and the Pleiades while sprawled on beanbag chairs or perched on meditation blankets.

Tracks vary in style but the mood is always cosmic. "Starshower - 1st Movement" opens on tinkling cascades of chimes and low, rolling synthesizer melodics that rise, fall, and slowly swirl into life like a distant galaxy in midbirth. "Parallel Lives" burbles with shooting meteors and Vangelis-style synth pads while "Galactic Alignment" opens on cycling acoustic guitars that echo and bleed into washes of echo. The centerpiece of the album is the 24-minutes-plus opus "Origins - Winds of Time." Here, an ominous three-note chord progression (reminiscent of Wendy Carlos' music in The Shining) rumbles below formations of echoing guitar and pitch-shifting synthesizers.

A deep foray into the landscape wherein macro and micro and inner and outer merge as one, Celestial Zen is a trip behind your eyelids back to a galaxy that's as familiar as an old friend from childhood dreams. Remember to check your baggage so you can float into the outer cosmos without being dragged back down to the earth's gravitational pull, and surrender the ship's controls to David and Steve Gordon. As a record of a time when electronic synthesizers were all analog and yoga and meditation classes were impossible to find outside major cities, Celestial Zen is like an old space captain who knows tricks the youngsters don't. Close your eyes, put on those fuzzy headphones, and let the bonds of space and time dissolve in a wash of chimes and gurgling Moogs." - Daily OM