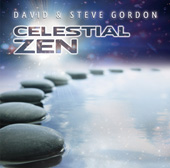 Our new release, Celestial Zen is now available for listening and purchase on the Sequoia site.  This is one of the classic spacemusic albums from the 80's, now available on CD and download for the first time ever.  Check it out and then post a review and share!

We recorded this music in 1984; it was released on vinyl LP and cassette under the title Celestial Suite, and has not been available on compact disc until now.  The studio sessions took place shortly after the founding of Sequoia Records with the release of the Environmental Music Series. our first albums of ambient music and sounds of nature recorded in Sequoia National Forest. Two of those early recordings, Misty Forest Morning and Peaceful Evening, went on to become classics of new age music and continue to find new listeners even today.

We created Celestial Suite as a part of what we called our Visionary Environment series because we intended the music to take the listener on inner journeys into the world of the mind.

After receiving countless requests to release this album on compact disc, we decided to first make a few improvements. We located the original reel-to-reel master tapes  and brought them into our studio for remastering using today’s superior audio technology.  We extended the album with a bonus track from one of the other early Visionary Environment albums, and titled the new version Celestial Zen. But for the most part, we preserved the music as it was, because we feel that it has stood the test of time.