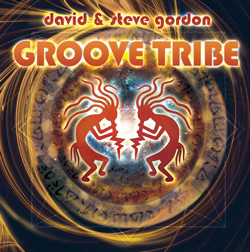 Embark on an ambient-techno shaman journey...

We have two new releases to share with you today!  They are both currently available on the Sequoia website, just click the titles below to hear sound samples.

I'll share with you some behind the scenes info about Groove Tribe today and then I'll do a post soon about Reiki Healing Light.

We thought about how satisfying it would be to create a new fusion between the Native/World music sound of our drumming albums with the electronica styles from the Buddha Lounge series.  This kind of Native drumming meets electronica is a new kind of music we have not heard done before.

To create this new eco-world music sound we combined Native drumming, exotic global instruments, guitars and chants and then blended them with mystical trip hop beats and textures. We used acoustic instruments like Native American flute, Pan Pipes, piano, guitar and vocals from our award-winning Native-influenced world music bestsellers like Drum Medicine and Shaman’s Vision Journey and then combined them with electronic synthesizers, electronica grooves and song structures.

The result is a mesmerizing and uplifting new re-mixed and re-visioned Native sound that is great for anything from yoga to dancing, driving or parties.   Now you can experience worldbeat and chill out electronic music like you have never heard it before.  At once earthy and spacey, organic and electronic – it’s like an ambient-techno shaman journey!

But the idea behind this project goes beyond just musical styles.  On a musical level, we found ourselves intrigued with the idea of combining ancient shaman rhythms and instruments such as tribal drums and native flutes with modern electronic beats and synthesizers.  We started out by using select phrases and tracks from our native fusion albums and then we remixed them with trip hop grooves and electronica elements.

Once we got deeper into the project and started to hear the results of our efforts, we realized that this kind of music represented bigger idea.  Shamanism is common to all ancient peoples.  We all share in these core rhythms as a part of who we are, and they can be found in a wide range of Modern electronic dance music and hip hop beats.

As modern electronica blends with ancient shaman rhythms, we discover the emergence of a new universal tribal culture; one that celebrates humanity’s diversity and awakens our common values.  You can see this in the growing tribal music festival culture, popular movies such as Avatar and in music such as Groove Tribe.  We hope you are as inspired by this idea and this music as we are.